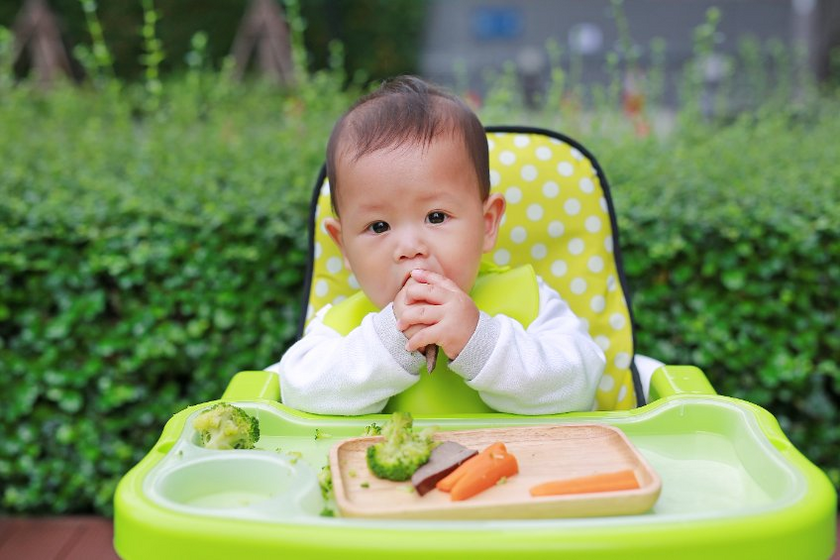 No matter how long you decide to breastfeed, it’s a rewarding journey with your baby.  After early breastfeeding, at about 3 months or so, you’ll find the process has smoothed out and become second nature.  Nursing at 6 or 7 months is typically a fun time for most moms and babies.  Eventually, your baby will be interested in the food on YOUR plate, a natural progression as your baby develops.  This article will help you navigate the later months of breastfeeding, all the way until you and your baby decide it’s time to stop.

Babies become more efficient at feeding after the first three months; therefore, their feedings typically shorten in duration.  Many moms worry that that their babies may not be getting enough to eat when they compare early breastfeeding to later months, especially if they are taking notes or keeping track in a breastfeeding tracker.  There can be a dramatic difference in the time babies take to breastfeed, but this is just because they get more efficient at removing more milk in a shorter period.

In addition, “nursing strikes” are also very common.  As they develop, babies become much more curious and mobile.  Many moms talk about the gymnastics of nursing a four- or five-month-old who also wants to put their foot in their mouth or attempt some yoga moves while they’re nursing!

How do I breastfeed when the baby starts getting teeth?

Nursing babies don’t chew but biting behavior can develop.  Most moms don’t need to worry about it, but if your baby does bite, don’t be startled.  Just take the baby off your breast, distract him for a minute or two, and then put him back on.  Your baby is smart; if you must repeat that, she will learn what happens if she bites.  If you shriek or make a strange face, she will make it a game!  Biting is most common in the beginning or at the end of the feeding when milk is not flowing as much.

What do I need to know about food allergies before starting solid foods?

Around 4 or 5 months of age, we encourage allergy introduction testing for the eight foods that babies tend to be the most allergic to:  milk, eggs, tree nuts, peanuts, shellfish, wheat, fish and soy.

We recommend introducing miniscule “tastes” of those kinds of foods.  For example, for tree nuts, parents can put a little dab of almond butter on the tip of their little finger and just put it to the baby’s tongue or under the tongue, just to get a taste.  Do that once or twice per day, for two or three days in a row.  Then you move on to the next allergenic food, which means you’ll cover them all over a course of 24 to 30 days.  Introducing microscopic amounts of these most allergic types of foods prepares babies to eat regular solid food, which is usually around six months of age.

If they have a reaction, it will be a little rash around the mouth.  Remember, babies have been getting exposure to these foods through their mother’s milk.

When should my baby begin eating solid foods?

First, when your baby is about 4 or 5 months of age, make him a part of mealtimes.  Eating is a learned social behavior.  It’s not just putting food in a body in the dark and quiet.  Your baby will watch you move your fork from plate to mouth and maybe even reach out for some.  That is the way it’s supposed to be!

When he can sit up, hold his head up by himself and has the motor skills to reach out, he’ll need more iron-rich foods introduced to his diet. This is usually around 6 months.  The iron stores he was born with will be depleted and there’s not much iron in mother’s milk.  Babies aren’t designed to be exclusively breastfed for much longer than about six or seven months of age.  By then, they’re physiologically ready to move towards incorporating solid foods.  However, the bulk of their diet is going to be breast milk for the first year.  So even when they begin eating solid foods, it’s a small amount and it starts slowly.

How do I introduce solid foods to my baby?

Most families want to practice what’s called baby-led weaning, which is a misnomer.  It’s a term developed in the UK where weaning means the introduction of complementary foods to a diet.  In the US, a better name is baby-led feeding.  In past times, moms were advised to puree foods or buy pureed baby foods, put it on a spoon and feed it to their baby.  Baby-led feeding consists of sitting your baby in a highchair and putting some spears of fruits or vegetables in front of her, letting her pick them up and gnaw on them at her own pace.  You can add in other foods your family eats over time, waiting a few days before introducing something new.

At around 9 or 10 months of age, your baby should be sitting down for three meals a day, just like everyone else in the family.  Sit him in his highchair, make sure he’s safe and put a few appropriate foods on the tray.  Let him eat what and how much he wants, being sure to alternate a wide variety of textures and colors.  It doesn’t need to start with mushy foods from a spoon; it can be a spear of banana, a chunk of avocado, bits of meat, cheese or a little bit of broccoli.  Parents worry that their babies will choke, but they really can eat most anything.  They shouldn’t be given whole nuts or popcorn until 5 years old.  Grapes should be cut up into teeny, tiny little pieces.  What we’re looking for at this stage is that they reach to pick up the food and put it to their mouth—exploring their food and getting interested in it.

Note:  It is not safe to give honey to babies under one year old; they can develop a rare form of botulism.  If you haven’t done the allergy food challenges at 4 or 5 months of age, introduce those foods last: milk, eggs, tree nuts, peanuts, shellfish, wheat, fish and soy.  If your family is vegan or vegetarian, talk to your baby’s health care provider.

Will my baby not want to breastfeed once she begins eating solid foods?

It is very rare for babies under a year old to try to wean themselves from nursing.  Even after the introduction of solid foods, a baby will still want to and need to breastfeed.  Remember, at 4 or 5 months, babies become very active and may act a little less interested in nursing, but that’s just because they’re getting very interested in the environment and want to do six things at once.  The solution to this problem is to go into a quiet room, pull the shade down and turn the TV off.  Make the room boring and give the baby a little toy to keep her hands busy.  You can also try to breastfeed while laying down.

How will I know my baby is getting enough nutrition between breastfeeding and solid foods?

Typically, most babies can breastfeed prior to being sat down to be fed, but there are some babies who love their milk so much, they’ll really get full and not have much interest in solid foods.  In those cases, we tell parents to give them the solids first and then let them nurse.  At about 9 months of age, pediatricians check hemoglobin levels to make sure that the iron is high enough.  That’s how they can tell babies are eating enough appropriate foods.  If hemoglobin is low or their weight starts to flatten out a little bit, it’s almost always because these babies breastfeed first and get full on breast milk (which doesn’t have any iron in it) and then sitting down to solid food.  All that needs to be done is to reverse that:  sit the baby down to eat solid food first and then breastfeed.

Are there any myths associated with the introduction of solid foods?

Usually, moms today deal with well-meaning parents and grandparents that insist they must introduce solid foods in a certain order: first mush baby cereal and then mushy strained vegetables and fruits.  Baby-led feeding is very successful; therefore, the recommendations have changed.

When should my baby start drinking from a cup instead of a bottle?

A cup can be introduced usually around 7 to 9 months of age, with just water to let your baby begin to develop some skill with it.  At 7 months, it’s a plaything.  At 8 months, they start to get the hang of it. By about a year old, they should be pretty good at drinking from a sippy cup or straw.  It’s best for kids to discontinue drinking from a bottle at around 15 months of age.  That doesn’t mean they have to stop nursing, just stop drinking from a bottle when they are not nursing.  This is because teeth are coming in and if the baby is attached to having milk or juice at night, the sugars from these liquids stay on the teeth and can cause decay.  Additionally, the habit of laying down with a bottle gets harder and harder to break.  It’s good to break that habit at about 15 to 16 months old, before the “terrible twos” start to set in.

Why is the shift to solid food a key time during my baby’s development?

The whole process of transitioning from nursing to solid food must be spoken about in conjunction with development because you’re not just pouring food into the baby anymore.  You must work in both modes to feed your growing child.  In the beginning, a baby’s life is all about sucking milk.  As they grow and develop, they realize they have hands, they discover their environment, they have toys, start careening around the house, develop motor and verbal skills and have more to their day than just sucking!  In the grand scheme of things, the environment created while babies transition from nursing to eating solid foods is a foundational time, and one of the first periods where kids begin to acquire the skills they need to grow and make good choices.